So, for Labor Day weekend, my family was heading back up to Cape Cod again, this time with our older son, Ben, recently returned from graduating college (and working during the Summer) in Minnesota to start work with the DOT in New York, but missing our younger son, Stephen, who had just left to start a Junior year semester abroad in Barcelona. These kids lead interesting lives!

Inspired by their example, I took a look at the calendar and saw that I could spare two days for riding my bike back to the Cape (Tues. and Wed.), with Laura and Ben picking me up during the third day (Thurs.) on their drive there, if I could figure out an appealing and practical route.

OK, maybe "if" was the wrong word there -- I mean, once I figured out the route.

My key parameter at this point was to try to do something a little bit different. In all my prior rides to Cape Cod, I always went out through Long Island and took a ferry from Orient Point to New London before continuing onward. So this time, I decided to stick to the other side of the Long Island Sound and take the MetroNorth train to New Haven (bikes allowed, without the requirement of boxing, unlike on most of Amtrak (although they've recently started a trial run on the DC to Chicago corridor)), and start my ride from there. That also had the benefit of avoiding what I anticipated would have been a difficult routing task -- getting from NYC to New Haven on a bike without spending too much time on a busy Route 1.

From New Haven, because I didn't want to repeat my route by sticking to the coast and going through New London, I decided to head North, up towards Hartford and Manchester, enticed also by about 20 miles of a bike path along the way. From there, I could head East, go through Providence mostly on bike paths (a small repeat from last time, but very pleasant) and then into Massachusetts passing through Fall River.

So that's what I did. Using, of course, the excellent resources of both Ride with GPS and Google Maps. The only difficult part was figuring out where to stop each night that would get me enough mileage for the day, but also end up somewhere with lodging and a restaurant within walking distance. This was harder than it sounds -- on Day 1 I ended up in the itsy-bitsy town of Chaplin, CT at the Passport Inn & Suites (a grander sounding name than the accommodations actually warranted) -- but managed to upgrade to a Hampton Inn just outside of Fall River for Day 2.

On Day 3, I made it all the way to Sandwich, at the base of the Cape, before Laura and Ben (who had left that morning from NYC) caught up with me and, ahem, gave me a lift.

But that's not all! (As they say on late night TV.) With Climate Ride looming a little over a week away, I also worked in two shorter rides in and around the Cape over the weekend. Dare I utter the words? I actually think I've done enough training now to be in good riding shape and well-prepared for the 390 miles from Bar Harbor, ME to Boston! (Knock on wood.)

But just in case, I also tossed in 75 miles of the Transportation Alternatives Century Ride this past Sunday!

If you've stayed with me this far, you've earned a few routes and photos: 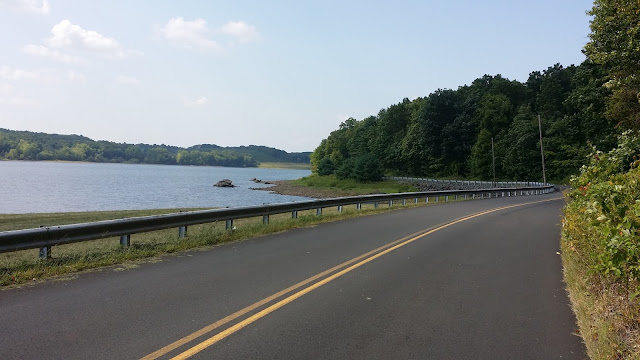 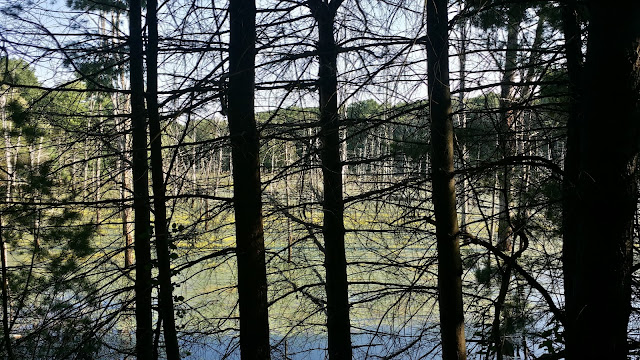 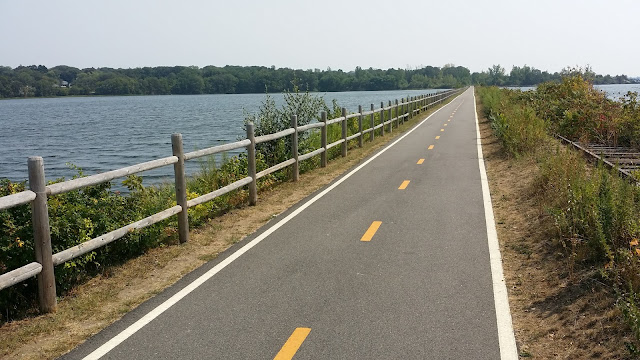 Posted by Roger Schwed at 9:03 AM No comments:

The Bear Mountain ride described in the post below was so satisfying that, three days later I turned around and did it again. The only tweak this time was that I made it a touch harder by including a loop around Lake Tiorati that I had missed the other day (and that added about 400 feet of climbing). The loop also had the benefit of taking me by the public beach at Lake Welch at around the 50 mile mark, which I thought would be about perfect timing for a dip on a hot day. 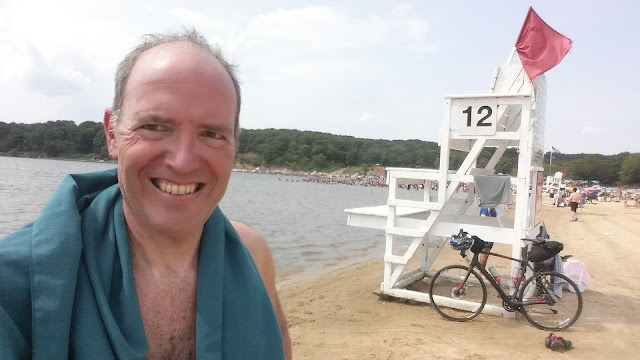 Being a gorgeous Sunday, the beach was jammed -- although in this picture I've moved away from the roped swimming area, with lifeguards, where there was barely a free patch of sand. And, behind the beach, is a huge grassy area, where tons of families, mostly hispanic, have set up barbecues, soccer games, etc. and are just generally having what looks like a great time with their kids. All for an $8 parking fee ($0 if you're on a bike!). In all, a lovely oasis, in Harriman State Park (in Rockland and Orange counties), not that far from NYC (and definitely not to be confused with the distinctly less lovely, undeveloped and no longer maintained -- if it ever was -- Donald J. Trump State Park in Putnam Valley).

I've had people (OK, two of you) ask what do I carry on a ride like this, and how? If you look closely at the picture above, you might notice that I have a rather large seat bag under my saddle. It's a great device -- the Viscacha bag from Revelate Designs. It's light-weight, water-resistant, and has a roll-top closure like a dry bag has -- and it holds a ton (the entirety of my, er, necessities for my 5-day Cape Cod ride fit in it). As importantly, you can use it on a road bike, including carbon-fiber frames and seat posts, without having to deal with trying to install a much heavier, and most likely incompatible, rear rack and pannier set.

So for this particular ride it's carrying a pair of shorts, underwear and t-shirt, all to change into at the bathroom at the Peekskill Brewery -- so that the hour train ride back to NYC is not uncomfortably spent in sweaty, tight, bike clothes -- a can of suntan lotion and a tube of chamois creme -- a small lock -- some power bars -- and a bathing suit and a camping towel. My phone and wallet go in a small top tube frame pack (which exists, but is not so easy to see in the picture above). All for a total weight penalty of about 5 pounds (the bag itself, empty, is under 14 ounces).

The only wrinkle in the day was that the Lake Tiorati loop road, unlike three days ago, was closed to traffic. Of course, I thought "How hard could it be for a bike to get by?" Well, harder than I thought: 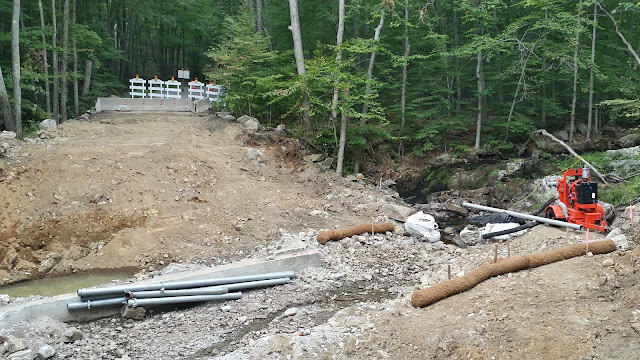 A bridge had been totally ripped out! But I managed to traverse it without incident, ducking under a few cable barriers and around some concrete ones -- even keeping my shoes dry -- and the positive benefit was that there were absolutely zero cars the entire way!

So, without further ado, the full day's route:

Roger Schwed
Born and raised in NYC, I'm 58 years old, happily married to Laura Dukess (27 years!), and have two wonderful boys, Ben (23) and Stephen (21). I'm a corporate attorney with my own practice (having done the big law, big corporation thing for many years) and a huge passion for biking. If you enjoy reading this blog, or are otherwise entertained or inspired by my trip, please consider supporting my favorite charity (OK, I'm also its Board Chair): I Challenge Myself, which since 2005 has been helping lower income high school students in the Bronx, Washington Heights and the Lower East Side develop leadership and workplace skills, as well as confidence and self-esteem, through endurance cycling training and rides, including a Century Bike Ride at the end of Spring semester. You can learn more about ICM, and/or make a donation, at www.ichallengemyself.org. Or you can use the "Support Me" link at the top of this page. Thanks!